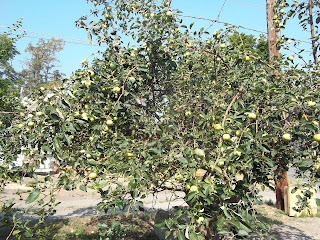 One year  I made a mistake on when to harvest the apples.  I thought they were green apples and so I harvested them only to find out that, no, they are most likely Galas.  So  I had two huge five gallon buckets filled with green unripe apples!  I couldn't even consider just throwing them out, what a waste!   But searching around my books I did not find one recipe for unripe apples.  Then I started researching it on the internet and found that you can use them for apple jelly.  In fact unripe apples contain much more pectin (which aids in jelling) than ripe apples so this would be a good use for them.  I processed them just as you would regular apples by first making juice from them and then getting on with the jelly process.

My only change was that although the recipe said to just cut them up core and all into the pot to make the juice I cut out the core for a few reasons.  You should know that apple seeds contain natural cyanide that can poison a person if, say, you ate like forty apples including cores in one sitting. So with that in mind I did the following.  First these apples are much smaller than store bought due to being under-ripe so you would have many more core to apple ratio than in a standard recipe upping possible cyanide, also the seeds themselves would be less mature and soft so much more likely to leach the cyanide into the boiling juice, third much of the cores were infested with worms so I just cut them out.  By the way never feed whole apples to rabbits!  They eat the seeds and die from cyanide poisoning!  We had this happen once! Everything worked fine and now I have 10 pints of apple jelly.  It tastes like it should and I will use it on toast or to glaze ham, chicken, or pork chops.

This would be a very good way to use up green apples that fall to the ground before their time.
Posted by christine at 11:40 AM

Email ThisBlogThis!Share to TwitterShare to FacebookShare to Pinterest
Labels: Canning

I love to hear from my readers!